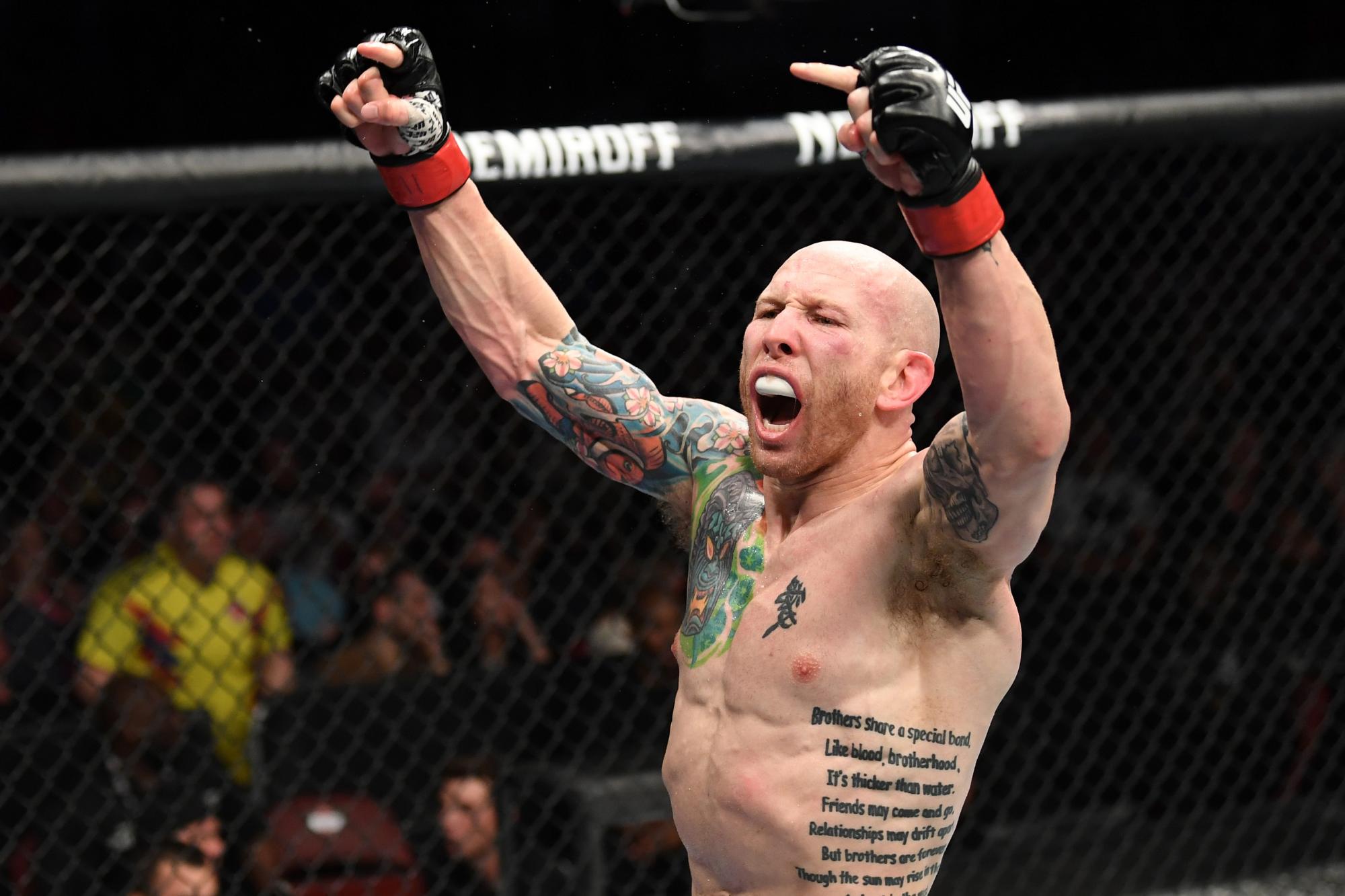 “I’ve never lost a fight in Sacramento,” added Emmett, who went 6-0 in his hometown while competing on the regional circuit. “It will be a glorified sparring session at the Golden 1 Center on July 13.”
By E. Spencer Kyte • Jul. 8, 2019

Josh Emmett wasn’t sure if he would ever get to step back into the Octagon.

Two months after registering the biggest win of his career by knocking out Ricardo Lamas in a short-notice, co-main event assignment on FOX, the Sacramento, California-based featherweight stepped into the UFC Octagon for a main event pairing opposite veteran powerhouse Jeremy Stephens. After an unbeaten run on the regional circuit and a blistering finish of a former title challenger, a win over a surging veteran like Stephens would have cemented Emmett as a legitimate contender and brought him one fight closer to competing for gold.

Instead, the fight put his future in the cage in question.

Early in the second round, Stephens connected with a sweeping left hand that put Emmett on the canvas and then swarmed, finishing the bout with a series of heavy blows that left Emmett unconscious on the canvas.

“I knew that I was going to get better, that the bones would heal,” said Emmett, who was left with several facial fractures following his bout with Stephens. “But when I would wake up sick and dizzy, I was like, ‘Is this ever going to go away? Am I going to be able to fight again?’”

For months after the contest, he would wake up feeling nauseous, and he knew he there was no way he could train, yet alone compete. Every time he would start feeling a little better and push himself a little more, the symptoms would return and force him back to the sidelines.

But the one thing that never crossed his mind was hanging up his gloves.

“Deep down, I knew I was going to fight again and, to be honest, I feel like I’m in too deep,” he said. “I’ve sacrificed everything to get here and my wife has been right there by my side, with us living in a room at my mom’s or a friend’s room or one-bedroom apartments, just so I could chase this. I felt like I’m in way too deep.”

Thankfully for the talented featherweight, his health improved and he was able to get back in the gym, working towards a return. At the end of February, he was booked against fellow knockout artist Michael Johnson on the second UFC on ESPN broadcast in Philadelphia and at the end of March, 13 months after losing to Stephens, he made the walk to the Octagon once again.

“I didn’t realize how much I loved it until I was back signing posters, doing my thing,” Emmett said with a laugh, explaining that even the standard elements of fight week felt fresh and welcomed. “I missed 13 months, so it was a long layoff for me — the longest layoff of my MMA career — and to go in there and beat such a well-established veteran in the fashion that I did, there are really no words that can describe it.”

After spending the majority of the first two rounds just a fraction behind Johnson in the speed department and unable to connect with something serious, Emmett started having more success in the third, and as they entered the final minute of the contest, he clocked Johnson with a left hand that made the former Ultimate Fighter finalist freeze up as he fell to the canvas.

With a single right hand, Emmett erased the concern and worry of the previous 13 months and thrust himself right back into the thick of the chase in the always-competitive 145-pound weight class. 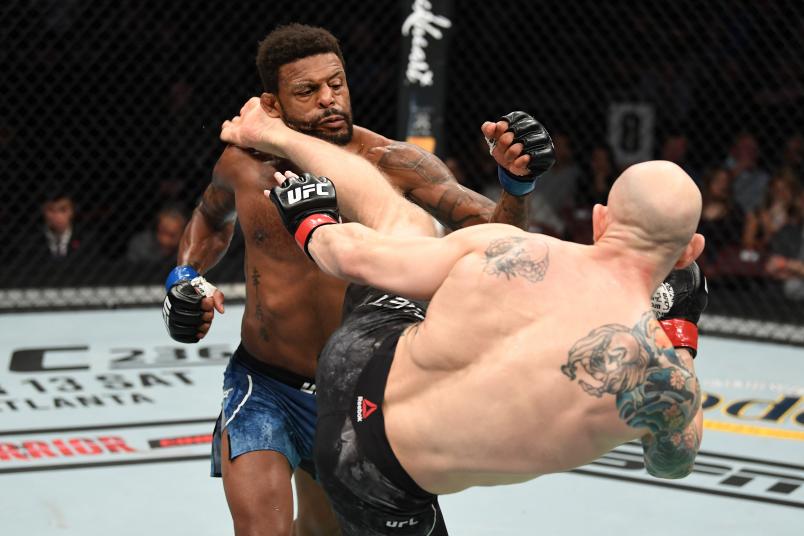 And this weekend, he gets a chance to showcase his skills at home in Sacramento in a crucial clash with fellow emerging contender Mirsad Bektic.

“Team Alpha Male HQ is right here, so it’s like we’re going to practice,” said Emmett, who has trained with the city’s renowned fight team for the entirety of his career. “Everything is the same regimen — I’m going to sleep at home, do all my body work, seeing all the same people I always see and then instead of me going to the gym for a practice, I’m going to go to the arena down the street.

“I’ve never lost a fight in Sacramento,” added Emmett, who went 6-0 in his hometown while competing on the regional circuit, winning the lightweight title with West Coast Fighting Championship and successfully defending the belt with a third-round stoppage win over current UFC fighter Christos Giagos in his final bout before getting called up the big leagues. “It will be a glorified sparring session at the Golden 1 Center on July 13.”

The bout with Bektic, which lands in the middle of Saturday’s main card, is a crucial contest for both men as they jockey for position in the featherweight division.

Entering on a two-fight winning streak, the 28-year-old Bektic was tabbed as a future champion as he worked his way to the Octagon and has largely justified that advanced billing through his first seven UFC appearances, posting a 6-1 mark with each of his last four wins coming by way of stoppage.

But the one man to beat him thus far, Darren Elkins, just so happens to be a teammate of Emmett’s, and while the two are very different fighters, the local favorite admits he’s picked Elkins’ brain a little in advance of Saturday’s contest.

“There are certain little things that you can always lean on coaches and teammates for in terms of what their strong suit is and certain things to watch for or that I can capitalize on,” said Emmett, who is one of five members of the Team Alpha Male squad set to compete this weekend. “But at the end of the day, Darren and I are super-different fighters and I won’t really know until I get in there. As soon as I get in there and get hit, then I’ll know (how everything measures up to my expectations).

“I know Mirsad is a dangerous fighter — he’s a fast, explosive fighter; good striking, good top pressure, good in those scrambles — but I also feel like he hasn’t fought anyone like me,” he added. “I think (UFC matchmaker) Sean Shelby did a great job by matching us up because we’re so similar in style. I think this is going to be an entertaining fight.”

With the longest 13 months of his life behind him and entering the weekend off the biggest win of his career, Emmett is looking to use Saturday’s bout with Bektic as a chance to establish himself amongst the elite in the featherweight ranks and hopefully secure a date with one of the few competitors ahead of him in the rankings later this year.

“I got into this later than most, so I don’t have time to beat around the bush or be built up fighting once a year,” he began. “I want to fight as consistently as possible, as long as I’m healthy. With a big win over Mirsad, I want something that gets me closer to the title.

“I haven’t wanted to fight behind me — I want to fight forward — but it seems like everyone is booked or different stuff is going on, so I take these fights. But I want something that gets me closer to the title.”

If this one goes anything like the last one, Emmett should get his wish.