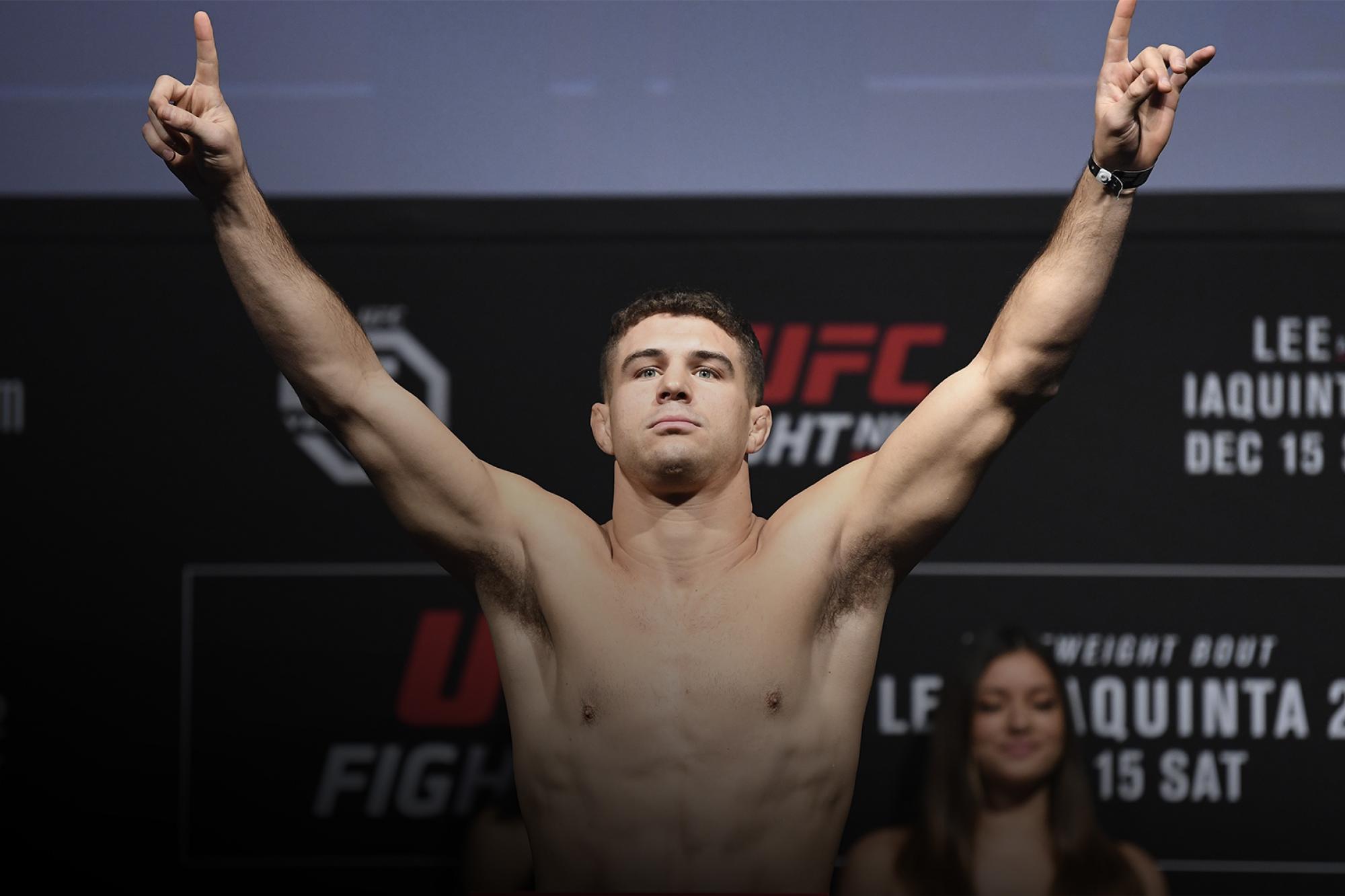 "Raging" Al Will Do Whatever It Takes To Beat Dan Hooker

Al Iaquinta Prides Himself On Leaving It All In The Octagon And He Plans To Bring That Mindset To UFC 243 On Saturday
By Thomas Gerbasi, on Twitter: @TGerbasi • Oct. 1, 2019

Perhaps the most intriguing aspect of this weekend’s UFC 243 co-main event between Al Iaquinta and Dan Hooker is that when the two lightweight contenders are on top of their game, it’s hard to imagine them losing to anyone.

But this is mixed martial arts, and with so many ways to win or lose and only 15 or 25 minutes to get it right, it’s inevitable that sometimes a fighter will walk into the Octagon and it just won’t be their night. So what happens when the gate shuts and nothing goes right?

“You revert back to your training, the nights in the gym where it's just not your night,” said Iaquinta. “And the way we spar, we put the full gear on and we have a fight. Some nights it's your night and some nights it's not. And the nights that it's not, you really gotta find a way to eke out the win. Do whatever it takes, dig deep, believe in all your training, and buckle down and get the job done.”

If you’re one of the elite in the game, more often than not, you get that job done and find a way to get the win. Iaquinta is one of those folks, and he’s got the nine UFC wins and No. 6-ranking to prove it. And while there have been setbacks, including a decision loss to Donald Cerrone in May that still earned him a Fight of the Night bonus, he arrived in Melbourne early with a fresh outlook on his career and the next chapter in it.

“It's another thing to add to the list of all the cool things I've been afforded the opportunity to do,” said Iaquinta. “It's been fun. We were just walking down by the bay, we passed by Marvel Stadium and that place is huge. It's sick. So this is gonna be awesome. But at the end of the day, inside the cage, nothing changes. It's just another opponent.”

This ability to enjoy the experience while keeping his eye on the task at hand doesn’t come easy to everyone. But at 32, Iaquinta has the experience in fighting and in life to make it look effortless. Having fought in Australia before, like he did when he stopped Ross Pearson in 2014, doesn’t hurt either.

“You feel a little more comfortable, a little more confident acclimating to the time difference,” Iaquinta said. “The first time I think I was way off. This time I'm way off but I'll be fine in a couple days. (Laughs) I came out a little bit earlier than the last time and the Australian people, they love the UFC. I've been interacting with a lot of the fans.”

One of those fans helped Iaquinta and company find their way back to the airport to return their rental car when they got lost and had no Wi-Fi, and moments like that remind the New Yorker just how big things have gotten for him and his peers.

“Everyone's real knowledgeable about the sport, there's a good buzz in the city about the fight coming up and what a great city it is as far as sporting events go,” said Iaquinta, who makes sure to point out that despite the good times down under, he’s not on vacation

“We've been training hard,” he said. “We've been doing two sessions a day on very little sleep, so I wouldn't really call it vacation, but it's good to stimulate your mind and see new things, even if it's just an hour walk around the city between training sessions and before a nap. I love fighting in different places.”

And even though he’s fighting a New Zealander, Iaquinta is likely to get just as many cheers as Hooker, simply because he always shows up to fight, and that may be even more evident in his first three-round fight since he beat Diego Sanchez in April 2017.

A win over Hooker might just throw Iaquinta back into the five-rounders again, something he’s used to, considering his last three bouts went the championship distance. And, of course, the one five-rounder he’d love to get back is one against the 155-pound champion, Khabib Nurmagomedov. 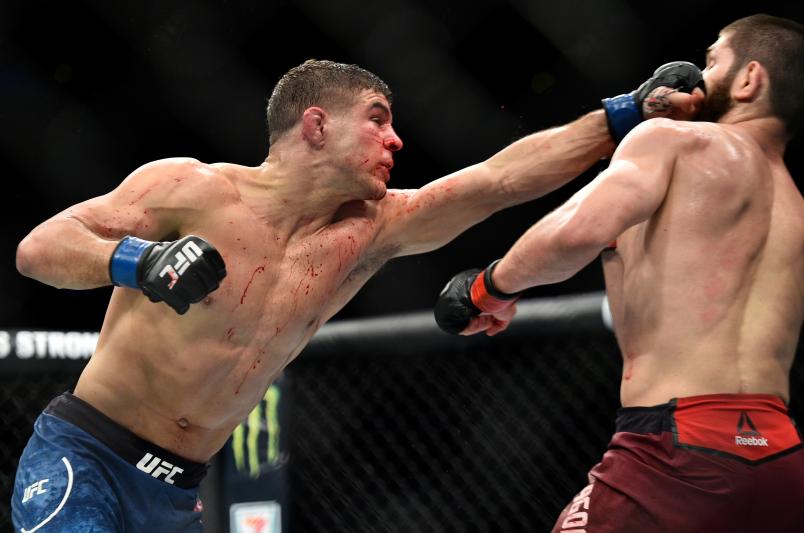 In April 2018, Iaquinta was scheduled to face Paul Felder, but then a series of calamities hit the UFC 223 card in Brooklyn, and all of a sudden, “Raging Al” was going to face Nurmagomedov in a five-round main event. When 25 minutes were over, Nurmagomedov had the win and the title, but Iaquinta had his moments. And when you combine the performances “The Eagle” has had in finishing Conor McGregor and Dustin Poirier with Iaquinta’s one-day notice for the first fight, there are question marks about how the Long Islander would do in a rematch. Iaquinta has those questions too, even though he’s realistic in the odds of a second fight with Nurmagomedov happening anytime soon.

“It's definitely motivating that he (Nurmagomedov) keeps winning and keeps looking really dominant,” he said. “I left the Octagon that night wishing that I had the time to prepare that these other guys are afforded. This is the first step to getting back to that shot. That's the goal. The goal is to get that title shot, get the time to prepare and do it right.

“But I would say I'm not really on his radar right now,” Iaquinta continues. “I'm coming off a loss and there are a lot of other guys that he's probably way more concerned about like (Tony) Ferguson and maybe Justin Gaethje. But you're only as good as your last fight and I think that after this fight he will be thinking about me again.”

And whatever it takes to get that win, Iaquinta is willing to do it.

“We put so much into every fight, so you gotta leave it all out there every time,” he said. “For me, it's not even a thought. I put so much into this fight that I'm winning no matter what it takes. I'm getting the job done and winning, and even when I do lose, I gain respect from the fans because of my mindset. I'm going in there to win at all costs, and you're gonna have to kill me to disrupt my plans.”