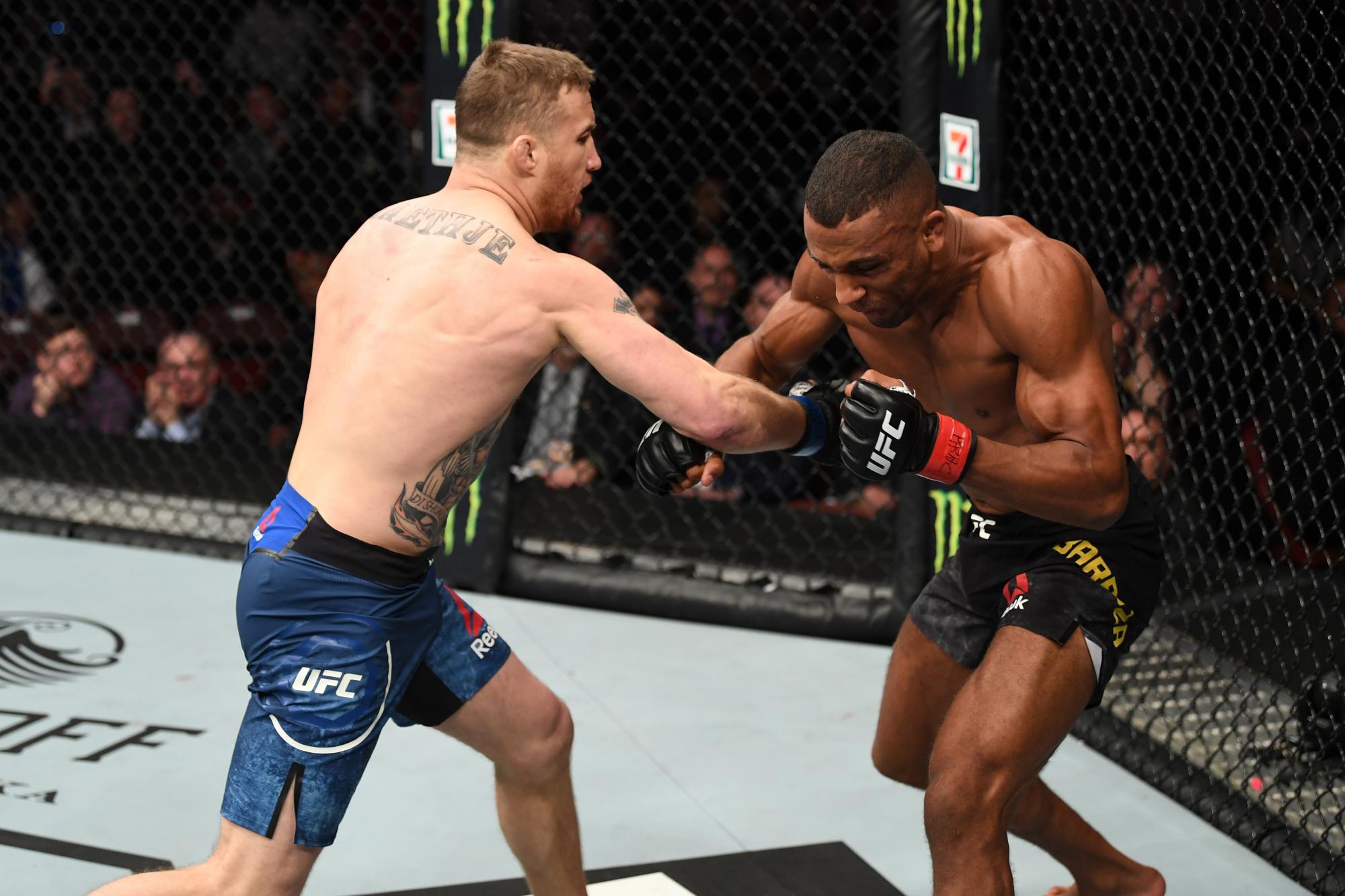 Alex Perez’ return to the bantamweight division was a successful one, as he shut out Mark De La Rosa over three rounds in the UFC Philadelphia opener at Wells Fargo Center.

After some good back and forth standup action to begin the fight, Perez got the fight to the mat with a little over two minutes left, and the Californian’s ground strikes allowed him to surge into the lead.

Perez got the bout to the mat even earlier in the second round, and while De La Rosa did score well off his back, the top control remained with Perez for the majority of the frame and it was more of the same in the final round as he sailed to victory via three scores of 30-27.

Flyweight appears to be a good fit for Maryna Moroz, whose move to 125 pounds produced a unanimous decision win over previously unbeaten newcomer Sabina Mazo.

Moroz welcomed Mazo to the Octagon with some stiff jabs that bloodied the Colombian’s nose, and a takedown followed, taking Mazo’s offense out of the equation for the majority of the first round.

Mazo successfully defended Moroz’ first takedown attempt in round two, but Moroz was undeterred as she kept the pressure on her foe with her slick striking game and smothering clinch work.

Just when it looked like Moroz was going to run away with the fight, Mazo had her best round in the final frame, but despite landing some hard kicks down the stretch, it was too little too late to get the win.

Eight days ago, Casey Kenney was picking up his 11th pro win in the LFA promotion. Tonight, he earned his first UFC victory, as he made the most of a short-notice opportunity by beating former flyweight title challenger Ray Borg in a bantamweight bout.

The first two rounds were ultra-competitive, with both fighters trading takedowns and grappling control and neither able to take a dominant lead, but two takedowns by Borg in the second round did give him the edge heading into the final stanza. Borg picked up a fifth takedown as round three began, but with two minutes left, Kenney got Borg’s back and nearly sunk in a choke. Borg got loose and scrambled back to his feet, where he locked Kenney up against the fence before another slam to the mat. Kenney did rock Borg briefly in the final moments, but Borg roared right back, leading to a heated exchange of punches before the horn ended the bout.

The fight went to the mat in the first 30 seconds, with Holland locking in a guillotine choke. After a few dicey moments, Meerschaert got free, and after a scramble, Holland got into the top position. This time, it was Meerschaert locking in a choke, but this time it was Holland’s turn to escape. With a little over a minute to go, Meerschaert kept fishing for submissions, but so was Holland, with the fans enjoying the fast-paced first five minutes.

Fatigue was setting in for Meerschaert in round two, but he kept looking for the finish, with Holland always able to fight his way out of trouble. And by the end of the round, Holland was scoring with a series of hard ground strikes, giving the judges some interesting developments to think about.

A guillotine choke attempt by Meerschaert early in round three nearly hit the mark, but Holland pulled free and went back to even the score with some ground strikes, keeping the ebb and flow of the bout going to the final horn.

Featherweight up and comer Kevin Aguilar halted Enrique Barzola’s four-fight winning streak while extending his own run of excellence to nine with a unanimous decision victory.

Aguilar and Barzola were competitive on the feet throughout the first round, but as the fight progressed, it was Texas’ “Angel of Death” who began to take control with the more effective and accurate strikes. But in the third, it was clear that Barzola was far from finished, and his late surge made it close on the scorecards, but he ran out of time in terms of turning the fight into his favor.

Social Post
Desmond Green def Ross Pearson via TKO at 2:52 of Round 1

Lightweight veteran Desmond Green’s third UFC win was his most impressive, as he stopped England’s Ross Pearson in the first round.

A counter right briefly dropped Pearson in the second minute of round one, but the Brit recovered quickly. And while the competitive standup action continued, all of a sudden Green got a takedown and began unleashing ground strikes. Pearson tried to get free, but ultimately, the endless stream of right hands brought in referee James Chappell to stop the fight at the 2:52 mark.

After getting an accidental eye poke and a bloody nose at the hands of Rodriguez in the early going, Aguilar was finally able to get to work, and she nearly sunk in an armbar. Rodriguez was able to defend and get a referee restart from Keith Peterson, but once the two rose, Rodriguez poked Aguilar in the eye a second time. This time it cost Rodriguez a point, but she went on to end the round with a legal blow that staggered Aguilar.

Rodriguez put on the full court press in round two, punishing Aguilar with a series of hard knees. The body shots from the Brazilian were particularly effective, but the gutsy Aguilar was able to make it out of the round. And while she took more punishment in the final round, there was no questioning Aguilar’s heart. But on this night, it was Rodriguez who earned the victory.

In a meeting of evenly-matched 145-pounders, Sodiq Yusuff eked out a hard-fought three-round unanimous decision over Sheymon Moraes.

The featherweight up and comers got acclimated to each other in the opening round, with both having their moments but neither scoring with anything that got the other in trouble.

Moraes and Yusuff took each other’s thunder well as the action heated up in round two, but again, it was a tough round to call, with Moraes perhaps edging the frame but Yusuff doing good work as well.

With the result seemingly up for grabs in round three, Yusuff and Moraes both looked for that fight-altering punch, and with a minute left it was Yusuff landing it, as he dropped Moraes with a hard right hand. The Brazilian was able to survive, but the damage was done, with Yusuff emerging with the victory via scores of 29-27 and 29-28 twice.

It was another late-fight submission win for Scotland’s Paul Craig, as he handed hot light heavyweight prospect Kennedy Nzechukwu his first pro loss in the third round.

After coming up short on a takedown to start the bout, Craig pulled guard and locked up Nzechukwu’s arm, but the Texan pulled free and called Craig back to the feet. Craig obliged but went right back to his ground attack, clearly focusing on his foe’s arm. Nzechukwu kept defending well, but Craig continued to chase submissions. A left kick to the head did jar Craig briefly, capping off an interesting opening round.

Craig dragged Nzechukwu to the mat in the second minute of round two, but Nzechukwu was able to get in the top position, where he fired off elbows on his opponent. After getting back to their feet, the two traded accidental fouls, Nzechukwu poking Craig in the eye and Craig landing a low kick. From there, the action consisted of Nzechukwu chasing and Craig defending, drawing boos from the crowd.

Waterson played the role of aggressor in the opening round, with kicks from all angles and quick punch combinations helping her build an early lead. Kowalkiewicz eventually adjusted, but the first round belonged to the Albuquerque product.

After some more busy standup work, Waterson threw Kowalkiewicz to the mat with three minutes left in round two and nearly ended the bout in the closing moments of the frame with an armbar, but the ultra-tough Kowalkiewicz survived.

Waterson kept the foot on the gas in the third and final round, never letting Kowalkiewicz into the fight as she cruised to the win via identical scores of 30-27.

Social Post
Josh Emmett def Michael Johnson via KO at 4:14 of Round 3

Back in action for the first time since February 2018, featherweight contender Josh Emmett scored a spectacular come from behind third-round knockout of Michael Johnson, re-establishing his place among the best at 145 pounds.

The game plans were clear for both in the opening round, with Johnson looking to utilize his speed and reach while Emmett sought the bomb that would end his opponent’s night. And though Johnson led in volume, the harder shots were being landed by Emmett.

Johnson got into a rhythm in the second, and he looked comfortable as he implemented his stick and move strategy on the forward-marching Emmett. This cool carried into the final round, but as Emmett began to have his best moments of the fight, he then ended it, with a single right hand sending Johnson down and out at 4:14 of round three.

Long deserving of a place in the middleweight top 15, Jack Hermansson may have secured that place with his performance in the UFC Philadelphia co-main event, as it took him less than a minute to submit jiu-jitsu black belt David Branch.

It only took Hermansson 30 seconds to get Branch to the mat, and then he quickly locked in a guillotine choke. Branch was trapped, and a tap out followed at the 49-second mark, giving “The Joker” his biggest pro win.

Lightweight action heroes Justin Gaethje and Edson Barboza delivered the expected fireworks in their UFC Fight Night main event at Wells Fargo Center in Philadelphia, but it was Gaethje landing the bomb that finished the fight before the horn marking the end of the first round.

Gaethje landed the first two leg kicks of the fight, but Barboza wasn’t far behind. Yet when Barboza focused on the kicks, Gaethje went upstairs with his punches and rocked the Brazilian before the two tied up against the fence. Ninety seconds in, the fighters separated and went back to the middle of Octagon and traded punches, Barboza getting briefly rattled again. Moments later, a single right hand sent Barboza hard to the canvas, and that was it, with referee Keith Peterson halting the bout at 2:30 of round one.